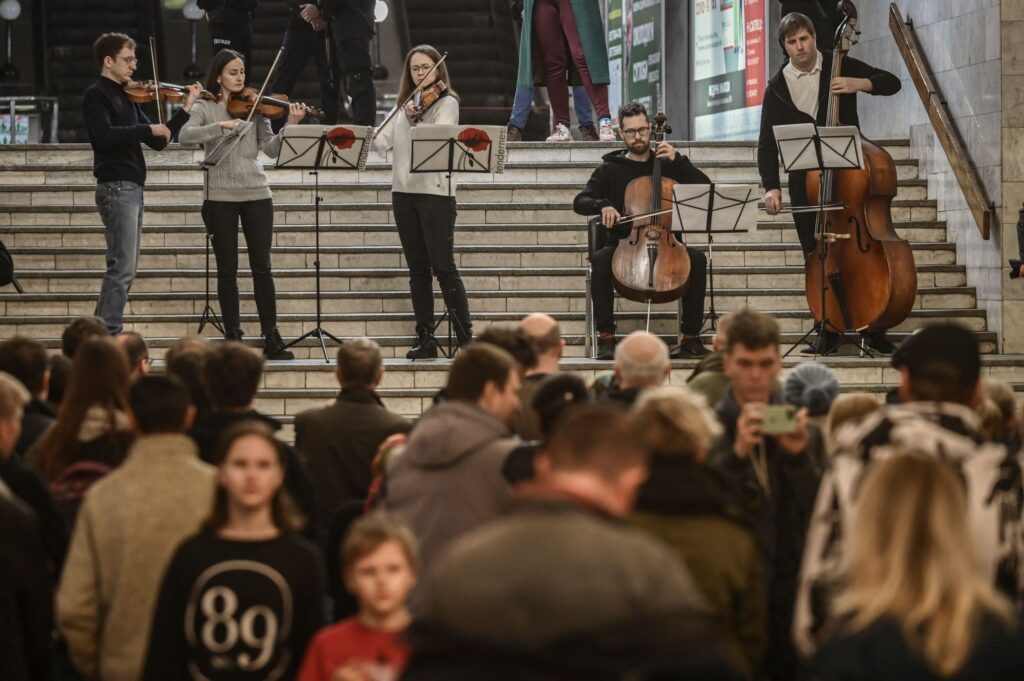 In a Ukrainian city hit hard by Russia’s invasion, five musicians brought their instruments underground — seeking to drown out the thunderous explosions with their violins, cello and bass for those taking shelter in the subway.Are you on Telegram? Subscribe to our channel for the latest updates on Russia’s war in Ukraine.

The conflict halted plans for the Kharkiv Music Fest, an annual international classical music festival in Ukraine’s second-largest city. So the organizers said they scrambled to improvise amid war — descending into a subway station and a business’s basement, hoping for safety from the assaults overhead.

“Music can unite,” art director Vitali Alekseenok said. “It’s important now for those who stay in Kharkiv to be united.”

The original concert would have included a recital by French pianist Lucas Debargue and was to be held in the grand hall of the Kharkiv Philharmonic on Saturday.

Instead, the “concert between explosions” — as it was called on social media — started with the Ukrainian national anthem, prompting audience members to put their hands over their hearts.

The program included the music of Bach, Dvorak and other composers, as well as arrangements of Ukrainian folk songs. Hundreds of all ages watched, sometimes holding one another.

The program was adapted to highlight the connections between Ukrainian and Western European culture, Alekseenok said.

Music teacher and violinist Olha Pyshchyta told The Washington Post on Sunday that performing in the subway sparked a range of emotions, after a month of war.

She said she was angry — and tired — “but at the concert … we felt unity.”

“I, like all Ukrainians, are waiting for victory,” Pyshchyta said.

Fellow violinist Stanislav Kucherenko told The Post that the concert was unlike any other he’d played. “There was no stage excitement that usually happens when performing for people,” he said, but “I knew that I was where I should be.”

Kucherenko said music has a “strong influence on the psycho-emotional state of a person” and could, “in the conditions of war,” help people to cope with fear and stress and inspire “faith and optimism.”Kharkiv Music Fest moves to subway amid war in Ukraine Kharkiv Music Fest, an international classical music festival, was scheduled to start on March 26. Amid the war in Ukraine, musicians played from the subway. (Video: Maria Avdeeva via Twitter)

Sergiy Politutchy, director of the Kharkiv Music Fest, said the underground concert showed that “amid the darkness … there are eternal values and a future in our country,” Sky News reported. The concert proved that “our country is melodious, beautiful, intellectual and will overcome all these difficulties,” he added, according to the report.

The concert was among a handful of musical moments for Kharkiv since the Russian invasion.

Before the war, Kharkiv was known as Ukraine’s intellectual capital. With more than 30 universities, it brimmed with students and was a well-known scientific and cultural hub. Today, missile strikes have ravaged the 19th-century architectural gems in its center. Around half the population, about 700,000 people, have fled, according to the regional administration, and those who have stayed regularly seek shelter underground from airstrikes.

Karachevtsev posted a video on social media to raise awareness about the destruction of Kharkiv as well as funds to restore his hometown.

Working as a volunteer in the war effort by day, assisting with evacuations and distributing humanitarian aid, Karachevtsev, 30, told The Post that he decided to stay in the city despite the heavy shelling to support the people of his hometown and lift their spirits. He said music encouraged people “to keep fighting.”

Last month, as Russian troops were closing in on Kharkiv and people were attempting to flee, a young boy sat at a glossy white piano in a hotel lobby and began to play.

A video of him captured by a Post correspondent went viral online, attracting the attention of the world, including composers Philip Glass and Paul Leonard-Morgan, who said they never imagined their music would become the evocative soundtrack to a war.

Elsewhere, a video of a 7-year-old Ukrainian girl, Amelia Anisovych, singing “Let It Go” from the Disney movie “Frozen” inside a bomb shelter in Kyiv catapulted her to fame.

Like millions of others, she has since fled to Poland. Amelia performed Ukraine’s national anthem at an event this month to raise funds for those fleeing the war.